It just dawned on me that I never posted the Stephen Curry MVP piece I promised. 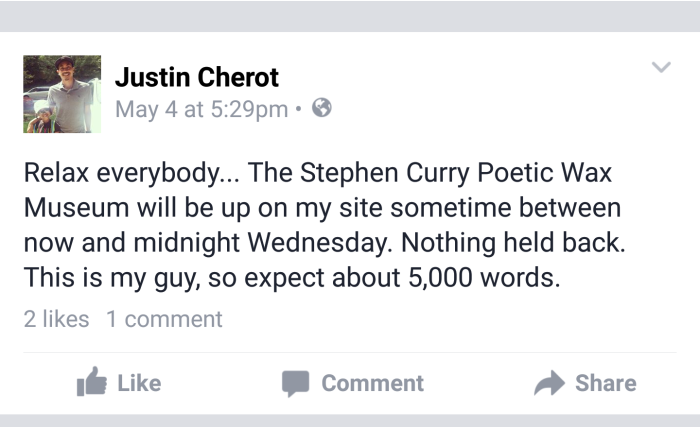 The truth? I was petrified at the time. When it comes to spitting high praises and borderline hyperbole, my track record hasn’t been good. A small part of me feels personally responsible for having assasinated Amare Stoudemire and O.J. Mayo… and maybe even Jimmer Fredette (although I’ll probably be on my death bed whispering softly to whoever’s next to me, “I’m convinced that in the right system with the green light, Jimmer has a place in the NBA”).

This is a bold statement, but one that I absolutely have to make: Steph is my favorite basketball player. Not just currently, but of all-time.

Let that marinate for a second. I’ve been watching hoops religiously since the late 80’s and early 90’s. I saw all of Michael Jordan‘s prime years. Watched Reggie Miller come off countless screens and nail dagger after dagger. Caught the comet that was Penny Hardaway. Sat in amazement as Kobe Bryant replicated 95.5% of what Jordan did. Sure, maybe I only caught the tail end of Larry Bird and Magic Johnson careers, but I saw enough to know they were amazing. Hell, Dirk Nowitzki, the best player on my favorite team, will always have my heart.

But I identify the most with Steph.

The lazy argument would be that I’m drawn to him because he’s a great shooter, and I’ve been known to launch a few threes in my day. Honestly, though, his ability to hit threes just scratches the surface of why I love the kid.

He might have been Dell Curry‘s son, but coming out of high school he was like the mutt no one wanted. Too skinny, too one-dimensional, too high-risk to give a scholarship. And even after he had success at Davidson, the talk shifted to, “Yeah, he’s a great college player, but how in the hell is he going to get his shot off in the NBA?”

Can’t lie: as much as I loved his game, I wasn’t even completely sold on his NBA prospects. He shot the ball well enough to be a rotation player in the league for 20 years, but as a point guard in college (remember he played the two during his freshman and sophomore years), he had moments where he flat-out struggled.

I don’t think you can blame GM’s for being wishy-washy on his pro potential. There haven’t been a ton of college combo guards who have justified being lottery picks. More often than not, if you have to ask the question, “Is he a point guard?”… he’s not.

In fact, and maybe someone out there in cyberspace can correct me, but during all of my time watching the NBA, only two guys have come into the league and ended up answering that question with a resounding “yes”: Russell Westbrook and Curry. And ironically, when both are on Team USA this summer and on the court together, I bet you Curry would be pegged as the one.

Buried in all of this, I think beyond all the stuff Curry does on the court as clearly the best offensive player in the league at this moment, it’s everything that he had to deal with off the court and the vindication of silencing every single hater that makes him my favorite.

Which brings me to why I’m writing today, and it’s a question that has been bothering me throughout Golden State’s entire playoff run and literally through after EVERY GAME of their 23-0 start:

Why are people continually hating on him and the Warriors?

You want high-level comedy? ESPN, NBA on TNT, NBA Memes, etc. all have Facebook pages, and, well… see for yourself.

Stacey is for sure entitled to her opinion. But to say they won’t win another ring… with all of their rotation players with the exception of Andre Iguodala either in or entering their prime… is kind of silly.

As for the Cavs being injured last year… last I checked injuries are part of the game, and in that sense, the Dubs have been kind of lucky. That said, I’d argue Cleveland played Golden St. tough in part because two of their weaker defenders–Kevin Love and Kyrie Irving–were not present. Now the counter argument is that Irving and Love take a lot of pressure off of LeBron James offensively, but to a degree, you play more into the Warriors’ hands. Thus, you’re in a higher-scoring game, and instead of losing 96-87, you’re losing 110-101. Either way, you’re still losing.

Like Golden St. hasn’t played anyone good yet. We’ll just forget that they beat the Clippers (playoff team), Grizzlies (playoff team) and Raptors (playoff team) two times each. Or that the Dubs are fresh off beating a very good Pacers team on the road (another thing… 13-0 on the road to start the season!?). Or that they also own wins against the Bulls and an improved Hornets’ squad (if the playoffs started today Charlotte would be the East’s three seed). They’re not exactly playing a cupcake schedule… and even if they were, it is the NBA. I’d argue that right now, there are only two “easy” wins in the league: a home game against the Lakers and a game anywhere against the 76ers. And those teams will win anywhere between 25-35 times between them (with the Lakers doing most of the heavy lifting). 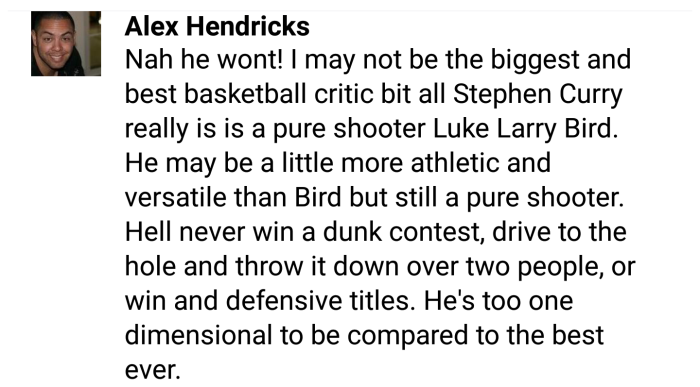 But what perplexes me is that there are still people out there who think that he’s just a glorified shooter. He’s arguably the best ball-handler in the league (more or less it comes down to him and Irving), and while he doesn’t blow you away with assist numbers, he’s still averaging a shade under seven assists per game for his career, which will rank you in the Top 10 generally year in and year out (related, a friend and I were having this convo the other day: there’s a difference between passing to get the assist and passing to make the right pass. I’d love to see Curry’s hockey assist pass before the assist numbers).

And for those saying he can’t finish in the paint, I’m just going to leave this here.

Inevitably, we’re going to talk about his defense, where he gets shredded in cyberspace. The truth is that he’s gone from an awful defender to an above average “plus” defender. True, he’s not going to lock anyone down, but the days of him getting consistently beat are done. He works to stay in front and plays the passing lanes beautifully, which is why he’s a fixture in the Top 5 in steals.

Here’s one more, and it drives me insane. 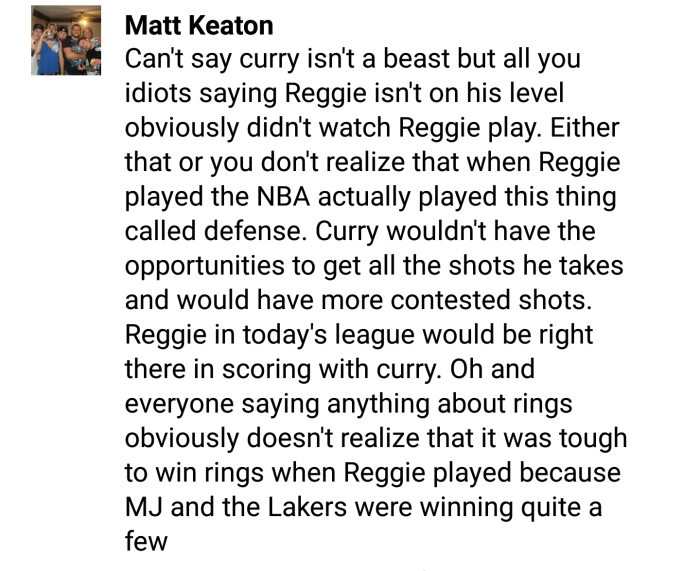 For context, Miller came out of the woodwork and said the following in an interview with The New Yorker: “So yeah, I’d take down Steph at my peak.”

No disrespect to Miller, one of my favorite players ever, but, as a shooter… no. Just no. If Steph was allowed to play off the ball and be strictly a catch- and-shoot player, he would probably make over 50% of his threes. If you don’t believe me, just wait until Curry is like 37 or 38 coming off the bench for a contender.

And the whole era thing really bothers me… ESPECIALLY WHEN I WATCHED A TON OF BASKETBALL IN THAT ERA! People say Steph wouldn’t have thrived in that era, but realistically he’s an amalgamation of three all-stars from that time:

Mark Price, a skilled shooter who somehow survived the tough hand-checking era and peaked when he scored close to 20 a game with nine assists in the 1989-90 season while shooting extremely healthy percentages (53-40-88). But it’s hard to compare them because, well, Price didn’t score as much off the dribble.

On the surface, Michael Adams had the most similar end-product stats and playing style, peaking at 26.5 PPG with 10 assists a game in the 1990-91 season. He took over eight threes a game that season before three-pointers were even cool.

But, yeah, that’s a shitty comparison, too. He had Steph’s shot selection… but didn’t even crack 30% from deep. Talk about the greenest of green lights (cue Fredette saying, “Shiiiit, let ME play in the ’90’s).

The last is Kevin Johnson, a guard with breakdown ability who broke the mold and introduced basketball fans to the scoring point guard. He didn’t shoot threes (he averaged 0.1 makes and 0.6 attempts in ’90-’91), but his dual threat potential (22-10) put the fear of God in defenders back then.

And you know what? Steph is probably better than all of them. The efficiency of Price… the shooter’s mentality of Adams… and the breakdown ability of KJ. I hate when people say he wouldn’t survive the ’90s, especially when that era is somewhat overrated to begin with… but that’s an entirely different conversation.

(Fine, fine, I’ll talk about it briefly. Not debating that MJ was the best player of all-time, but much of his success was predicated on the fact that in the early to mid-90’s, there was no answer for him at all at the two guard position. Defensively-challenged Miller? Inconsistent John Starks? The very right-handed, non-defense-stretching Clyde Drexler? You talk about Curry not being abe to play in that era. Would any of those three guys be the second or third best player on any NBA roster today? Just saying. Meanwhile, Curry has literally no nights off: Ricky Rubio probably starts the list of below average starting point guards, and people consider him one of the best defenders at his position.)

All that said, I’m going out on the limb and predicting that the Dubs drop their first game in Boston Friday. The Celtics have the recipe: depth and defensive-minded chippy guys, along with a guard in Isaiah Thomas who will make Curry work on the offensive end. Doesn’t help that Curry’s running mate Klay Thompson is a little banged up, and that Harrison Barnes has been out. If Thompson does the right thing and sits, can Golden St. really go into Boston sans two starters and…

…what am I talking about? Of course they can.

Of course Steph can.